Be prepared to be challenged, incensed, inspired Book Review Cardozo on the Parashah: The Book of Genesis

I am making my way through this incredible sefer, parsha by parsha, and it’s exciting, challenging, and maddening – just what you’d expect from Rabbi Cardozo. I love that it’s not a traditional parsha companion, but a series of assertions, observations, and questions that make you look at the Torah and the world in unexpected ways – but always based solidly on Jewish tradition. As a long-time fan of this unique man, I can only say it’s like visiting with an old friend but in a totally different place from what you’re used to. (As a book lover, I’m also pleased that it’s beautifully produced, impeccably edited and designed.) I recommend it unreservedly for anyone interested in big ideas and heartfelt homilies – not just people who are used to thinking deeply about Jewish ideas, history, and morality, but especially for people who aren’t – it’s a great place to start. 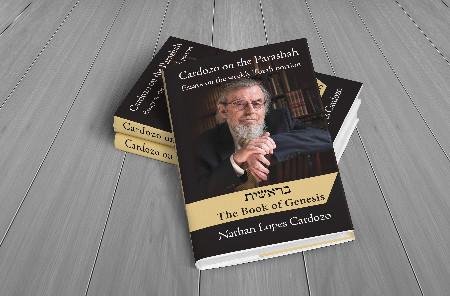 I can’t help adding an hilarious incident involving this book (with a spoiler alert that it gives away a charming surprise by the author). Last Shabbat, I brought the book to my shul, a traditional orthodox synagogue in Jerusalem, to illuminate the week’s parsha. Sitting next to me, as usual, was Rabbi Abba Engelberg, who founded Machon Tal and is the author of a wonderful series of books on the ethical aspects of the parsha. He plucked the sefer off the table in front of me, started thumbing through it, and got to the foreward. As you’ll find out, instead of the usual haskama (approbation) from big rabbis that are the standard in these kinds of sefarim, the foreward of “Cardozo on the Parsha” was “written” by God! In Rabbi Cardozo’s best tongue-in-cheek style, God basically gives the author permission to publish the book despite the fact that He has “grave doubts” Rabbi Cardozo “got it right.” This mixture of humor, healthy self-deprecation, and chutzpah is one of Rabbi Cardozo’s hallmarks. Anyway, Rabbi Engelberg got through the Foreward, laughed and declared it "a masterpiece." Then, between aliyahs, he showed it to the fellow sitting on the other side of him, who passed it on to the next guy, and it got passed around the shul for the next 10 minutes. Comments ranged from "brilliant" to "meshuganah” and sometimes it was just smiles or head-shaking. How many sefarim can do that? I loved every minute.


Cardozo on the Parashah: The Book of Genesis is available on Amazon and, for those in Israel, from Pomeranz Bookseller.