Faith and Defiance - The Journey of a Religious Rebel, deel 10 A Contemplative Autobiography

In memory of Betty Ninary z.l. of Beth Juliana, Israel

Chapter 10, God, Bach and the Chasidic Nigun, The "Untouchable" and Chazanut

Many of us, including myself, are deeply affected by the music of Johann Sebastian Bach, probably the greatest composer who ever lived, and by the compositions of other musical geniuses such as Beethoven and Mozart and modern composers.

Music touches the otherwise untouchable and intangible within us. It soars toward the infinite. When I listen to music, I feel like my feet are lifted off the ground and my soul is extracted from my body and starts to live a life of its own. There is no way to "prove" this feeling of transcendence, just as love cannot be proven. It belongs to an entirely different realm.

In general, the Jewish religious world has not given this enough attention. It is true that there is a Jewish musical tradition called chazanut (cantorial music), which can be deeply inspiring, but cantorial recitals often turn into entertaining musical performances rather than uplifting religious experiences. Most cantorial recitals do not bring me to a level where a genuine religious experience could take place. On the other hand, I sometimes get the feeling that the genre of African-American Spirituals possess soul-stirring powers and are infused with a sense of yearning and transcendence. The plaintive strains of mournful blues are artfully counterbalanced by the exuberance of rhythmic syncopation and ecstatic dancing. Sometimes I feel that these tunes touch my soul and transport me to Heaven in a more profound way than listening to showy cantorial performances.

While I am deeply moved by cantorial renditions of the famous Cantor Yossele Rosenblatt (1882-1933) or the few surviving recordings of the remarkable chief cantor of the Amsterdam Ashkenazi community, Cantor Israel Eljasz Maroko, accompanied by his choir, lead by Samuel Henri Englander, (all murdered in the Holocaust), whose members possessed voices that could reach the heavens I feel that sometimes they focused too much on the technical execution of the musical notes rather than expressing its soulfulness and spontaneity. There is no doubt, however, that sometimes these melodies make me shiver and that is a magnificent experience.

My father told me that many non-Jews would come Friday night to the main Ashkenazi Synagogue of Amsterdam, to hear Chazan Maroko and S.H. Englander's choir. This seems to have been a weekly occurrence resulting in many non-Jews knowing many sections of ‘Lecha Dodi’ by heart!

My grandmother Sara Lopes Cardozo-Gobets' brother, Michel Gobets (Amsterdam 1905- Dachau 1945), used to sing in this choir but, as was typical in those days, simultaneously served as a tenor in the Dutch opera and performed in the famous Royal Concertgebouw (concert hall) in Amsterdam.

She told me that Michel used to sing opera arias together with his gifted brothers as they were getting dressed on Sunday morning. In the summer, when the windows were open and the sound of the arias could be heard outside, the Amsterdam gentiles would bring their folding chairs and sit down to listen to them in the middle of the street. People came from afar to the Jewish quarter to hear these brilliant singers. Street Opera, free of charge!

There are two kinds of music that transport me beyond this world. The music of Johann Sebastian Bach and Chasidic melodies. In many ways they oppose each other but eventually they meet. This music enables me to reach beyond the superficial layers of prayer and penetrate to its depths.

This may sound strange coming from a rabbi, but I have to admit that when I listen to Bach's St Matthew Passion, although I do not identify with the words of its Christian text I feel as though I were hit with an uppercut to the chin thereby falling unconscious for the rest of the day. This overwhelming music can induce a religious experience in many people. It is not an understatement when people say that God owes Bach a lot for bringing Him so close to human beings through his music, or as somebody once said to me: Bach's music is the words of the Bible set to music.

The Religious Power of the Chassidic Nigun and Its "Nonsense" Syllables

The same is true for the Chassidic nigun (melody), which contains many forms, from slow, and introspective to fast and exultant. Chasidic melodies are unique. Unlike Bach and other forms of classical and liturgical music, they are often sung without words and instrumental accompaniment. Instead of words, they contain repeated syllables, which outsiders would deem "nonsense syllables" such as "bim, bam, bam" or "ay di, day."

One of the loftiest types of Chassidic nigunim is the “nigun devekut” (song of communion with God). These slow, contemplative melodies convey the experience of self-transcendence and union with God. The concept of devekut, based on the verse "And you shall cleave (tidbakun) onto Him" (Devarim 13:5; see also Devarim 4:4), is a fundamental tenet of Chassidism.

Other Chassidic nigunim are more lively and ecstatic in nature and are often accompanied by fiery dancing. The Chassidic nigun captures the dialectical turn from introverted contemplation to extroverted jubilation. This paradoxical fusion of intense longing and fervent ecstasy mirrors the paradox of divine transcendence and immanence. The nigun expresses both God’s total Otherness and awesome grandeur that no words are capable of expressing, while simultaneously celebrating God's closeness and intimate presence.

The Chassidic movement was started by Rabbi Israel Baal Shem Tov (circa 1698-1750), also called known as the Besht, The spirit of the Chassidic nigun emerged from the radical nature of early Chassidic theology. Chassidism teaches that music is a path to God that transcends the limitation of words. (Question to ponder: What would have happened had Spinoza the rationalist met the Baal Shem Tov the mystic?)

Several melodies are attributed to the Besht. Chassidic masters and their followers have composed thousands of nigunim and this musical creativity remains unabated to this very day. An example of a quintessential nigun devekut is the Arba Bavos, the four gates (to Heaven), composed by the founder of the Chabad movement, Rabbi Shneur Zalman of Liady (circa 1745-1812).

My dear friend, professor Herman van Praag (born 1929) from Holland and professor emeritus of psychiatry warns in his book Deference to Doubt: A Young Man's Quest for Religious Identity in First Century Judea (Jerusalem, Urim Publications, 2020), and other works, that we should not fall victim to Sigmund Freud's attitude toward religion. In his famous book The Future of an Illusion Freud regards religion as an illusion and claims that people need to be cured from this "religious fantasy."

Professor Van Praag responded to Freud's critique that to reduce religion and spirituality to nothing more than biological and neurological reactions in the brain and dismiss the totality of the religious experience as nonsense is "short-sighted and even foolish," (interview in the Nieuw Israëlietisch Weekblad, March 8, 2020).

"Many things", says Van Praag, "are unexplainable from a rational perspective. There are matters which rise above ourselves and which will never be solved." There is a need for human beings to search for something beyond themselves and use the imagination to make this part of one's life. This is the function of genuine non-dogmatic religion, says Professor Van Praag, and I am sure that he would agree with me that the search for the Above is well served by some "phenomenal" music such as Bach's St Matthew Passion or a Chassidic nigun.

I must admit that I am constantly surprised that a cold Portuguese Jew from Holland, with perhaps somewhat of a Calvinistic inflected personality like myself, gets moved by a Chassidic nigun when we Dutch were all raised with much animosity towards any expression of zeal and Chassidut. But we will leave this topic for another time!

This publication was made possible with the support of The Louis and Dina Van Kamp Foundation, August 2020.

With thanks to Yehudah DovBer Zirkind and Yael Shahar for their editorial assistance. 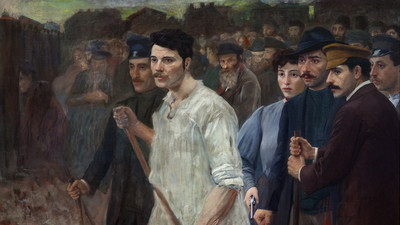 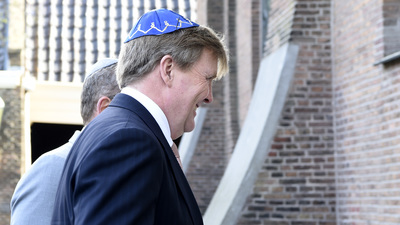